Recently, the United States may decide whether to take prosecution action against China in the WTO and then prosecute China. This is the announcement from the Ministry of Finance that â€œfrom January 1, 2011, the tariff rate for import and export tariffs will be Partial adjustments are made, "Export tariffs on individual rare earth products will also be increased," only half a month apart.

In Japan, Europe and the United States, China's rare earths seem to have "special significance" in every move. However, Japan, Europe and the United States have shown unprecedented "consistency of interests" on rare earth issues, and even tend to reach interest alliances. On the one hand, it is the "limited nature" of China's resources, and on the other hand, it is the "combination of vertical and horizontal" of international rare earths. The industry believes that the International Rare Earth Alliance "is intended to put pressure on the Chinese side", China's rare earth should extend to the upstream field.

Industry insiders have long called for China's rare earths to rank first in terms of reserves, output, and exports, but this does not mean that China's rare earths are â€œinexhaustibleâ€. It is necessary to adjust the rare earth export tariffs to reflect the scarcity of different varieties.

The Ministry of Finance announced that in 2011, China will continue to impose export tariffs on â€œtwo high and one capitalâ€ (high energy, high pollution, resource) products such as coal, crude oil, chemical fertilizers and non-ferrous metals in the form of provisional tax rates. In terms of imports, in 2011, China will implement a lower annual import provisional tax rate for more than 600 resource, basic raw materials and key component products. Among them, the first implementation of the annual import provisional tax rate includes resource products such as propane and butane.

In fact, industry experts say that China's rare earths have certain stock advantages, but they have contributed more than 90% of the world's â€œresponsibleâ€ each year. Huatai joint researcher Ye Hao even said that with China's new demand for rare earths in the future, at some time in the future, China will not be converted into imported rare earth resources.

US, Japan and Europe form alliance to force China to expand rare earth exports
Since China's rare earth exports cannot satisfy the "appetite" of Japan, Europe and the United States, the above-mentioned regions have begun to seek "different cooperation" in the field of rare earths. According to media reports, a few days ago, HeinzZourek, Director General of the European Commission's Enterprise and Industry, said during his visit to Japan that the EU is willing to take a step-by-step approach with Japan's international negotiations on rare earth new technology development and rare earth blending.

Zou Haike blamed China for "should continue to maintain a stable supply of rare earths inside and outside." He also stressed that "the EU will not hesitate to bring a lawsuit to the World Trade Organization (WTO) to consider the situation of the rare earth crisis. Stakeholders, Japan and Europe should fight side by side."

In addition to the EU, the United States has become one of the forces in the "opening" to seek rare earth exports from China. According to public reports from overseas media, on the 15th, the US government announced the "Important Resource Strategy" and proposed close cooperation with Japan and European countries to ensure the stable supply of essential rare earth resources such as electric vehicles and strategic weapons. At present, more than 90% of the rare earth imports in the United States are from China.

In fact, as early as October, the Japanese ambassador to China, Dan Yu, had convened a major ambassador to China, Britain, Germany, France and South Korea at the Embassy in China, demanding that China ease the export restrictions on rare earth elements. According to industry insiders, some developed countries have secretly hidden resources for their own interests, while at the same time demanding that China meet their "big stomach", which is "amazingly consistent" in the attitude toward rare earth resources.

Recently, Japanâ€™s Asahi Shimbun reported that even if China produces enough rare earths, it will not reach the shortage of rare earths in the world. It is expected that the demand gap faced by Japan alone will reach 7,000 tons to 8,000 tons in 2011.

Rare earth alliance "pressure" is difficult to have a real impact
In fact, the game between the international market and China on the issue of rare earth exports has never stopped, and Japan, where the rare earths are heavily dependent on foreign countries, is constantly moving. Prior to this, the Japanese government specifically proposed the "Rare Earth Comprehensive Countermeasures", clearly proposing to cooperate with other countries to develop new mineral deposits and so on. At present, Japan is actively coordinating with countries such as Vietnam and Mongolia.

European and American countries have also maintained "high attention". On November 30th, "Wall Street Journal" reported on the issue of Australia's signing of a rare earth purchase agreement with Australia. Asking about the possibility of structural changes in the supply market for rare earths.

"In fact, this time, the same thing as before, is putting a gesture and putting pressure on China." An analyst of the domestic rare earth industry who did not want to be named believes that "first of all, it is impossible for Europe and the United States to export rare earths to Japan." After all, the reserves are limited, and they must meet the needs of their own development. The verbal expression of "consistent action" is only intended to exert pressure and will not have any substantial impact."

Indeed, according to the agreement signed between Japan and Australia, the first phase of the Lynas project is scheduled to start production in the third quarter of 2011 with an initial capacity of 11,000 tons/year of rare earth oxides. The second phase of the project is expected to reach production in 2012, and the production capacity will be expanded to 22,000 tons. In China, the output of rare earth oxides in 2009 alone was close to 130,000 tons, and this year's oxide export quota was 30,000 tons. A number of rare earth mining and deep processing companies have indicated that they will not form pressure.

"So what we are going to do now is to focus on the rare earth industry to become bigger and stronger, and firmly grasp the pricing power." Analysts said, "China's actions to rectify small mines since 2005 have been very successful, and customs and other departments have also checked the export. Increasingly strict, effectively guaranteeing the pricing power of China's rare earth industry, the next step will be to further strengthen control."

China is the world's largest resource country and producer of rare earths. Its proven reserves account for more than one-third of the world's total, but trade volume accounts for more than 90% of global trade. Under the supply of â€œcontinuous supplyâ€ to the world in China, developed countries such as the United States and Japan have begun to â€œshrinkâ€.

The savvy Japanese introduced a rare mineral strategic reserve system in the early 1980s, and the reserve targets 10 rare metals such as nickel, chromium and rare earth. In 1985, Japan set about building a national reserve warehouse covering an area of â€‹â€‹tens of thousands of square meters. It is rumored that the current Japanese stock is enough for more than 20 years.

According to a US statistical report, China's rare earth production accounted for 97% of world production in 2009. The US's rare earth reserves account for 13% of the world's total, while last year's output was zero; Russia's reserves accounted for 19% of the world, last year's output can only meet the needs of domestic enterprises.

On November 10, the Ministry of Commerce issued the "Announcement on the Conditions and Procedures for the Declaration of Rare Earth Export Quotas in 2011", which stated that "improving the concentration of business operations and reducing the number of export enterprises", "To further regulate the export of rare earths, the state will export rare earths. The formulation of strict supervision by enterprises has been clearly put forward.

Zhang Zhong, general manager of Baotou Steel Rare Earth, said that the country is currently doing a lot of work on rare earths, including how to improve industrial concentration, how to guide enterprise development, and protect resources and the environment. According to relevant data, it is estimated that by 2015, domestic rare earth separation and processing enterprises will be reduced from more than 100 to 20, and rare earth deep processing technology is expected to develop rapidly.

5. Good flame retardancy, self-interest, and with HIPS mixed with moderate flammability.Light and non-toxic can be used in food and medicine industry.The resistance to rotation is poor, and the use of long time in the sun will change color.

2. The parts can be used in high temperature, such as gears, blades and valves, which can be used for stainless steel.

2. The fluidity difference is similar to Newton's fluid, the viscosity is sensitive to the temperature, the product thickness is generally more than 0.8mm.It is very easy to break down and decompose into corrosive gases.The molding temperature should be strictly controlled, the mould should be heated and the flow resistance should be small.

3, Polyphenylene oxide, bibulous rate is about 0.06% less, but traces of water will lead to product surface not smooth phenomenon such as silver, it is best for dry processing, temperature is not higher than 150 degrees, otherwise the color will change.

Bar specification: diameter from 10mm- 200mm, length 1000mm, other color and specification can be customized. 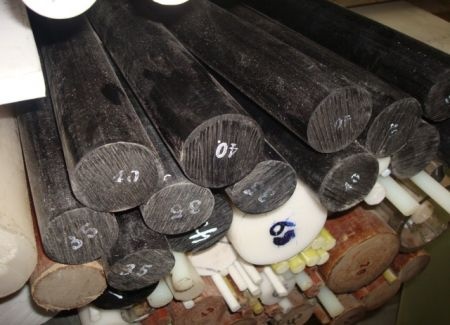